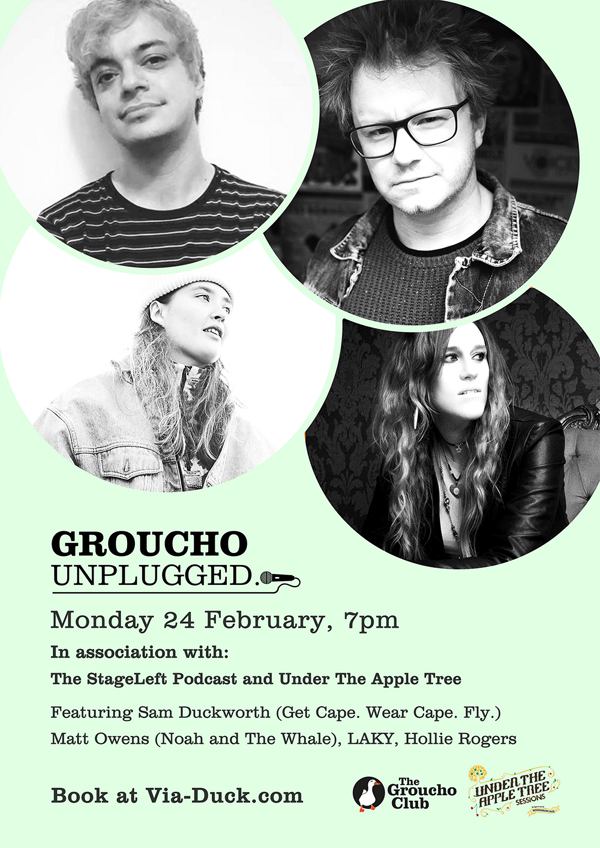 GROUCHO UNPLUGGED IN ASSOCIATION WITH YOUTH MUSIC & THE STAGELEFT PODCAST

This month's performers, in association with Under The Apple Tree, include:

British born singer-songwriter and musician Matt Owens first came to prominence as a founder member of indie-folk band Noah and the Whale. Releasing four albums, Noah and the Whale achieved huge success in the UK and overseas, selling over one million albums in the UK alone. The band toured the world between 2006 and 2015, playing hundreds of festivals, including Austin City Limits, Fuji Rocks and Lollapalooza, as well as touring with the likes of Arcade Fire, Bahamas, and Laura Marling.

February 2019 saw the release of Matt’s debut solo album, "Whiskey and Orchids" to widespread critical acclaim including a 5 star review in Maverick Magazine. It is an album that sits closest to "Americana" with its rich, lyrical storytelling, shot through with gallow's humour, combined with Matt's return to his beloved acoustic guitar, betraying hints of favourite artists Neil Young and Warren Zevon. Nigel Stonier produced the album which featured Tom Waits' drummer Michael Blair, Thea Gilmore, Carleigh Aikins from Bahamas, and Robert Vincent.

The album received substantial Radio play from BBC 6 Music, 5 LIVE, BBC Scotland and BBC Wales. A UK Tour supporting Thea Gilmore followed in May, (with Matt also playing in her band) then a summer of 25 festivals including Glastonbury and then joining Robert Vincent on his Autumn UK Tour.

2020 will see the release of Matt’s second album which he recorded in January.

Singer Songwriter LAKY’s melody-driven songs span a number of different genres from Indie Pop to Alternative Folk. In an industry often dominated by 'moody geniuses' LAKY’s presence and on stage humour means that her live performances at times transcend music and are a breath of fresh air to her audiences giving them an insight into her personality. “I love to make people laugh. I want a crowd to understand my songs and to do that, I want them to get to know me.”

Brought up on pop music spanning the 70’s, 80’s and 90’s LAKY’s influences are plentiful and eclectic ranging from Queen to Fleetwood Mac, Dolly Parton to Earth, Wind and Fire and everything in between, with even a little bit of S Club 7 thrown in there for good measure.

A N R Factory wrote “Stumbling across Pop artists with vocals commanding enough, parallel with what you will find in up and coming recording artist LAKY, is no easy feat. The London-based artist boasts a perceptible amount of potential in her style of soulful indie pop – we’d recommend putting her on your radar right about now.”

As well as being an artist, she is causing a stir as a songwriter, having recently signed a publishing deal with Mike Sault and Saultydog Publishing, LAKY attended the Chris Difford Songwriting Retreat, alongside the likes of Jamie Lawson, Beth Nielson Chapman, and Gary Burr.

LAKY is set to release her debut EP to her rapidly growing fanbase in early 2020. She spends most of her week in and out of writing sessions building her catalogue of songs. Having recently signed to booking agency CAA LAKY can also regularly be found playing live gigs at various locations around the country gaining plenty of praise along the way.

Hollie’s live performances consistently receive outstanding reviews, with regular reference to the level of candour in her lyrics and power in her voice. She has opened for the likes of Suzanne Vega, Midge Ure and Ben Howard, and is a regular performer at high profile festivals such as Glastonbury. Backed by BBC Introducing, Hollie has 2 studio albums, with a new release due in late 2020. Her previous release, The Body To Ground EP, was produced by 4-time Grammy-nominated James McMillan; funded entirely through Kickstarter. It’s available now, on all streaming platforms.