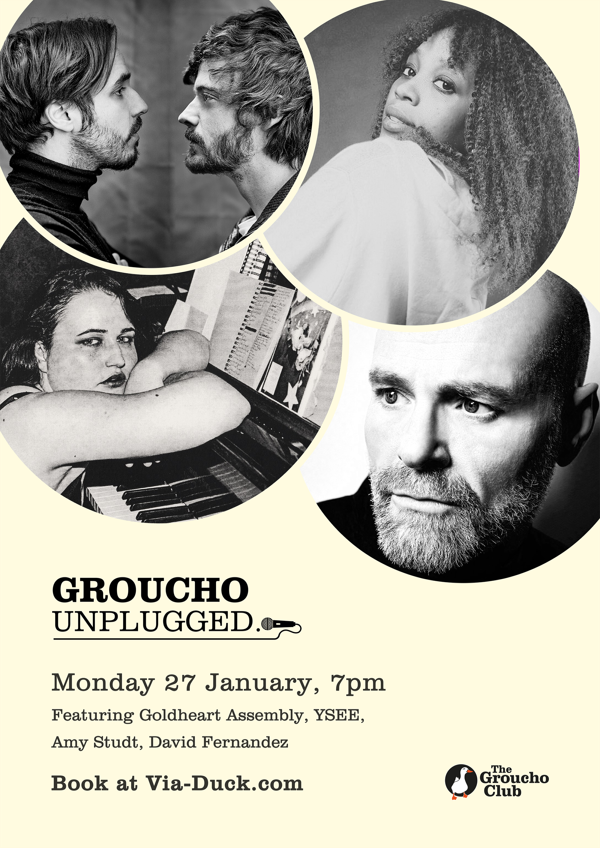 GOLDHEART ASSEMBLY Goldheart Assembly released 2 critically acclaimed albums and received huge amounts of support from Steve Lamacq, Coldplay Jonathan Ross and Dermott O’Leary to name but a few. The band remain one of the only unsigned bands to ever play a Radio1 Maida Vale Session and they went on to have 6 consecutive playlist singles on BBC 6Music. As well as selling out legendary venues like Scala, The Borderline, Kings College and ULU, the band also toured all over the US and Europe with acts like Band of Horses, The Civil Wars, The Magic Numbers and We Are Scientists. Finding time to play almost every major UK festival, SXSW and making a major appearance on US television to over 1 million viewers on Last Call with Carson Daly.

YSEE Ysee (A.K.A Audrey Gbaguidi) is a French singer, actress and author. Now based in London, she's been collaborating and touring with the legendary drummer, Tony Allen and features on his album 'Film of Life'. She is a part of Damon Albarn’s Africa Express. She's participated on some yet to be released recordings with Brian Eno/Tony Allen and Leo Abrahams. She also featured on 2 songs on UNKLE’s (James Lavelle) record released in August 2017, called 'The Road: Part 1'.

Currently touring worldwide with Noel Gallagher High Flying Birds, after a meeting with David Holmes in 2017, that lead her to collaborate on Gallagher’s last record  'The Man Who Built The Moon'. She featured on two songs 'Be Careful What You Wish For' and 'Fort Knox'. Since then she’s been a guest vocalist on his tour and has featured on two more singles and music videos in 2019. As well as touring in the US with The Smashing Pumpkins for a month, she's toured with U2, in New Zealand and Australia and appeared on Later… with Jools Holland.

Before this global tour, she started working on her solo career, which started on a high, as she opened at the Olympia Hall in France for Mary J Blige, George Benson, Seal, En Vogue and Boys II Men.

April 2019 saw her performing at Coachella, where she met L.A producers, Isom Innis and Sean Cimino, band members of Foster The People, which led to collaborating on a track called "Qu'est ce que je dois faire." She is now working on a solo EP that will be released before the summer 2020.

AMY STUDT Singer, songwriter and multi instrumentalist, Amy Studt, unveiled her series of musical chapters throughout 2019. Including ‘Overdose’, the follow up to the acclaimed 'Sleepwalker’ single, which conveys a beautiful, reflective message from a dark, dangerous and lonely place.

Available digitally at all the usual outlets, this was the fourth track in an ongoing stream of songs that ultimately completed the structure and story of Amy’s triumphantly received new album ‘Happiest Girl In The Universe’. A narrative diary of depression, hope and redemption.

The new long player features eleven bold, intimate and heartfelt tracks, was released on the 4th of October 2019 with a rave response and hit Rough Trade East’s Best Sellers wall of fame.

DAVID FERNANDEZ Hailing from Manchester, David Fernandez is a British born singer/songwriter, whose career started in the late '80s after first recording with Lisa Stansfield and Ian Devaney. During this time he cut his first single at Abbey Road Studios. He toured the UK extensively working with female vocalists including Rowetta Satchell and Denise Johnson and also spent time recording with Manchester based funk trio 52nd Street. After a six year stint living in Australia, he moved back to the UK and signed with London-based dance label Volume Records and released his next single 'My World' which went to number 1 on the UK dance chart.

After a long hiatus he went back into the studio in 2015 to record his version of the Etta James classic 'At Last' which was released on the 'Deconstructed' compilation album and became its biggest downloaded track. In 2018 whilst working on some new material, he met the German powerhouse production team of Matthias J. Stalter and Dustin Dooley at the Abbey Road Studios bar. The trio instantly hit it off and started writing and recording together, culminating in David's soul-inspired album, which will be released in early 2020.