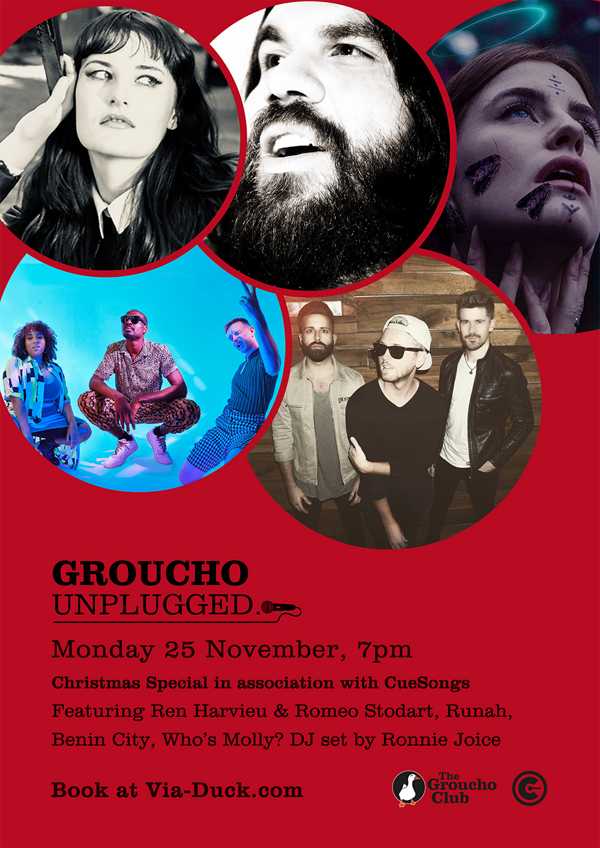 GROUCHO UNPLUGGED IN ASSOCIATION WITH CUESONGS

Ren Harvieu is a darkly enigmatic singer/songwriter from Salford, Manchester. Newly signed to Bella Union her long awaited second album is scheduled for March 2020. The album, produced by Romeo Stodart & Dave Izumi Lynch, departs somewhat from that 60’s setting of her 2012 UK Top 5 selling debut 'Through The Night' and delves a more HD world of deeper blacks and brighter colours both musically and lyrically as displayed on the album’s first single ‘Teenage Mascara’ which Jo Whiley made her infatuation record on BBC Radio 2, the iconic video for the song was also directed by legendary photographer Rankin. Ren struck up a telepathic writing partnership with Romeo, who also plays guitar in her live band. It is a record for all seasons, tongue firmly in cheek one minute, heart sucking in dark matter and exploding out supernovas the next.

Romeo Stodart is the lead singer/songwriter in the much loved London based rock n roll harmony group The Magic Numbers. The band comprising of two pairs of brothers and sisters have released five critically acclaimed albums thus far including the self-titled Mercury Music Prize nominated, million selling debut, the follow up Those The Brokes, 2010's The Runaway, 2014’s Alias and their most recent album, 2018’s Outsiders.

Outside of The Magic Numbers, Romeo has collaborated with a vast array of artists including writing songs for & with Jane Birkin, Edwyn Collins, Amadou & Mariam and The Chemical Brothers. He has contributed his unique guitar playing style to various projects, from Damon Albarn’s Africa Express collective since its inception, to playing banjo, guitar & harmonies on the Spiritualized album, Sweet Heart Sweet Light. Romeo was also the touring guitarist with Jimmy Webb & The Webb Brothers, accompanied Mcalmont & Butler on bass duties and recently he’s been producing and co-writing with Natalie Imbruglia & Kathryn Williams.

Together, Ren & Romeo also DJ at events as RnR and have their very own RnR radio show on Boogaloo Radio every Sunday 4-6pm covering themes such as Raunch vs Romance, Rented Rooms, Rags to Riches and Red Rum. They’re chemistry is undeniable, it’s a must listen.

RUNAH uses music to entice you into different realms. Having been featured in HotPress, Clash Magazine, Contact Music and many more, her debut album, an ‘escapist, hypnotic, and harrowing beauty’ which is receiving growing attention.

In 2019 RUNAH released STRANGE her debut album with the title track gaining 150,000 streams in just a couple of months. RUNAH will be bringing the year to a close by releasing glimpses of her second album, MOTHER. A concept album residing in other worlds, a hypnotic journey of birth, life and death concerned with The Mother, Earth. The title track is to be released in October, when the veil is thin.

‘Mother’ will be released via Beardfire Music, Dublin and was recorded and produced by Rohan Healy, David Virgin and Al Quiff at Beardfire Studio, Dublin.

Off the back of Ireland Music Week (formerly known as Hard Working Class Heroes), RUNAH is supporting Havvk in December, Amy Studt in the UK in November and Izzie Walsh in Manchester in November.

“The search for the spiritually divine has long been pursued by artists of all mediums, though none have done it as robustly and attractively as Ireland's rising folk pop artist, RUNAH. RUNAH's commanding ethereal voice is an undeniable force, driving "Strange” – Earmilk

“Escapist, hypnotic, mystique, power and a harrowing beauty, RUNAH's debut album has an individuality and uniqueness whose abstract creativity must be celebrated.” – REMY, Best of Irish Music and Film.

“RUNAH's music continues to create a timeless and hypnotic beauty through her unique sound and poetic lyrics.” – HotPress

“Her songs are shrouded in mystery, magic and dark, ambiguous emotion that makes her listener feel connected; yet also turns them upside down as they try to find their own truths, whilst navigating RUNAH’s prosperous world of evocative lyrical themes and occult pop-tinged soundscapes.” – When The Horn Blows

Alongside their own writing and performing, they have also recorded and/or performed with a number of illustrious artists, including ​Sons Of Kemet​, ​Bombay Bicycle Club​, ​Portugal. The Man, and ​Comet Is Coming​.

Benin City ​are often described as ‘genre-defying’, ‘a fusion of sounds’, and ‘unmistakenly London’. The make-up of the band reflects this as well, as does the abundant diversity of London itself: races, nationalities, sexualities and genders. In these political times the idea of identity has been pushed to the fore. The band’s third album campaign, beginning with the release of the What A Time EP​ this winter via ​Moshi Moshi​, is their chance to celebrate their differences and interrogate the problems and challenges within us and our society, conveyed with a strict adherence to Dance-Pop.

Winning rave reviews across UK press and radio, the band have been exciting crowds across the country and Europe this past 18 months, notably touring with ​Portugal. The Man​, and appearing at ​Latitude​, ​The Great Escape​, ​All Points East​, ​SXSW​, and ​Iceland Airwaves​ festivals amongst others.

Who’s Molly? just dropped their new single 'Dead Man Walking' on November 8th. Previous single ‘Until I Found You’ was added to Spotify’s #HotNewBand, #NewNoise and #TheRockList playlists, charted at number 45 in the Spanish chart, racked up 10k streams in its opening week, and has now surpassed 170k streams.

On 9th November they won Best Band, Best Single and Best Live Act at the Sound Board Magazine awards in Swansea which they headlined. They will be on the cover of the December issue of the magazine.

First EP 'New Tomorrow’ came out in 2016. The track ‘Touch the Sky’ was picked up by the International Olympic Committee and used as the music for their ‘Best of Rio 2016’ video clocking up a million views. ‘New Tomorrow’ was also featured on the Masters and the Euro’s Football Championships.

In 2017 they released their second EP ‘Welcome to the Good Life’ and were blown away when the title track was used for the trailer to the Tom Cruise movie ‘American Made’ in cinemas globally.

Their music has been used often on BT Sports, SkySports & UFC. 2018 saw the release of third EP ‘Fame’ and the band surpassing 1.5 million streams on Spotify. They also wrote and performed the Official Anthem for the 2018 European Athletics Championships, broadcast to over 1.2billion around the world.

In November 2018 they were introduced by BBC Radio 1 DJ Huw Stevens when they played ‘Welcome To The Good Life’ at the Welsh BAFTA Awards.

In Summer 2018 the band played to over 50,000 people at CarFest North & South, and played at shows with George Ezra, Paloma Faith, James Bay and Jess Glynne.    You can also hear Who’s Molly? on the new Mercedes Benz/League of Legends advert in China. Singer Karl collaborated with Jamie Morrison from Stereophonics on ‘Don’t Get Me Wrong’.