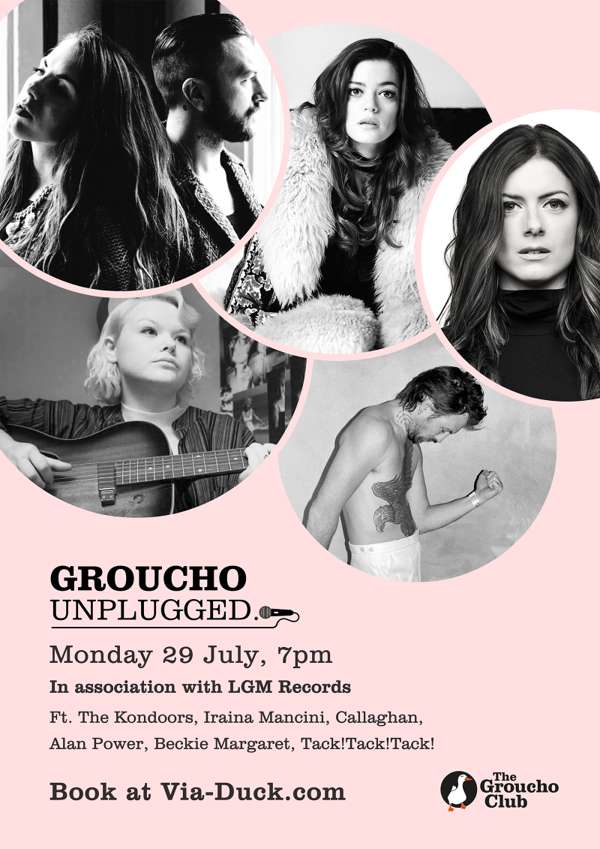 The acclaimed singer/songwriter duo have a rock/soul edge, influenced by the Stax and Motown era, with a musicality that belies their years.

Jess Greenfield and Gavin Conder, The Kondoors, became a couple well before they became a duo. Indeed it wasn’t until they joined forces with producer Steve Brown (Rumer- Seasons of my Soul/Laura Mvula- Sing to the Moon) that their unique sound began to take shape.

The pair had long been writing and recording their own material drawing on a host of influences from Sam Cooke, Paolo Nutini and Marvin Gaye to Dusty Springfield and Tina Turner, but it was only when they decided to record Jess’ song, 'Forgiveness', that they discovered the spine- tingling effect of their voices combined. Inspired by the ups and downs of their own relationship, it takes their raw, organic feel to the next level.

Both Jess and Gavin have already established themselves as must see live performers, with Jess being a member of Noel Gallagher’s High Flying Birds, they have supported and worked with a roll call of big names including Paul Weller, Bryan Adams, E Street band’s Steve Van Zandt, Dire Straits’ John Illsley, Sam Smith, Rod Stewart, Rudimental, Imelda May and Take That. They have been heard on Radio 2, Radio 6 Music and across local radio and in 2015 aced it at Andy Murray's wedding. Their social Media profile has seen them rack up over 100,000 views in only three days of their UK garage/acoustic video while similarly impressive figures have accompanied their Sky TV appearance and other songs.

Originally from the UK she moved to the USA in summer 2010 to record and tour with US singer- songwriter Shawn Mullins after he agreed to produce her debut album.

Since then Callaghan's been constantly on the road building her audience and headlining shows in towns and cities across the USA. Reviewing her live show US Magazine No Depression says "her extraordinary voice truly sets the music apart…nothing short of stunning."

In 2015 she recorded her second album A History of Now in Nashville and, returned to Britain to tour. Since then her profile has built substantially in the UK with three singles playlisted on BBC Radio 2, multiple headline tour dates and festival appearances at Cornbury, Cambridge Folk Festival, British Summer Time and more.

Iraina Mancini is a Singer/ Songwriter, DJ and Radio Host from London.

Taieb and Francoise Hardy as well as hints of Psychedelia and pop. Working with legendary producer / co writer Jagz Kooner at his infamous EchoPlex Studios in London and featuring a collaboration of talented musicians. Her sound has been described as luxury pop and the sort of vocal that harks back to an era no longer with us where Jane Birkin and Phil Spector ruled the style world!

Alan Power is a UK based singer, songwriter and performer.

Emerging from nowhere in early 2018 following a series of much talked about live appearances Power spent the latter half of 2018 recording what was to become Alan Power, Greatest Hits: Vol 1 (OUT NOW) and touring extensively.

With no online presence he sold out a string of shows and went on to share stages with The Vaccines, Matt Maltese, Jack Ladder, Spector, Nick Allbrook, The International Teachers Of Pop and Charles Watson, among others. His live show provoked attention for its unconventional nature and unpredictability; his mannerisms, quick wit and outdated dance moves quickly started to generate a word-of-mouth myth, a must see relic of the rock & roll generation.

Born and raised in sunny Southend, Beckie Margaret Mooney is an alternative/ atmospheric folk singer/songwriter that aims to enchant listeners with her endearing and somewhat autumnal music. Her ability to take you away with her through imagery and dreamy instrumentation creates a distinctive style.