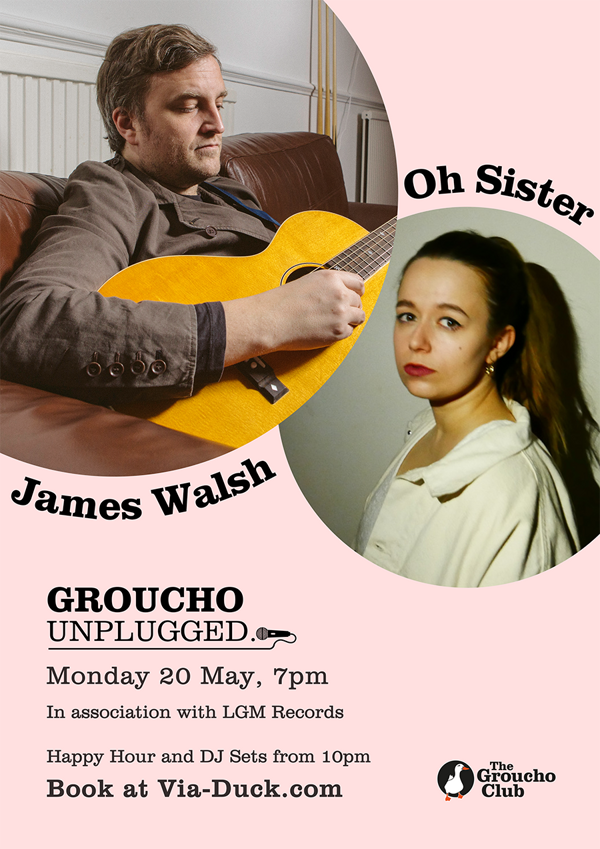 JAMES WALSH AT GROUCHO UNPLUGGED MAY 2019

We will be hosting an intimate showcase to celebrate the release of James Walsh's brand new album ‘Tiger On The Bridge', which was recently recorded in front of a live audience of fans at RAK Studios in London.

The frontman of multi-million selling band Starsailor, James Walsh has toured the world with acts such as The Rolling Stones, The Police, The Killers, and U2, whilst also finding time to write songs for Eliza Doolittle, Melanie C, Suzanne Vega, and Professor Green, to name just a few.

Most importantly, he happens to be a Groucho Unplugged regular and a firm favourite with attendees, so we're delighted to be welcoming him back to perform again.

Singer-songwriter Sarah Berresford has been performing under the name Oh Sister for 2 years. Her first release ‘watch the water’ received support from Spotify and reached over 1 million streams. Shimmery and dark, her music is inspired by Bedouine and Leonard Cohen.

They support children and young people to build their confidence, resilience, and self-esteem. Projects funded by Youth Music help to break down barriers at all stages – helping children develop an early love of music, providing diverse role models, introducing young people to a wide variety of potential career paths, and working with the music industry to make its practices more inclusive