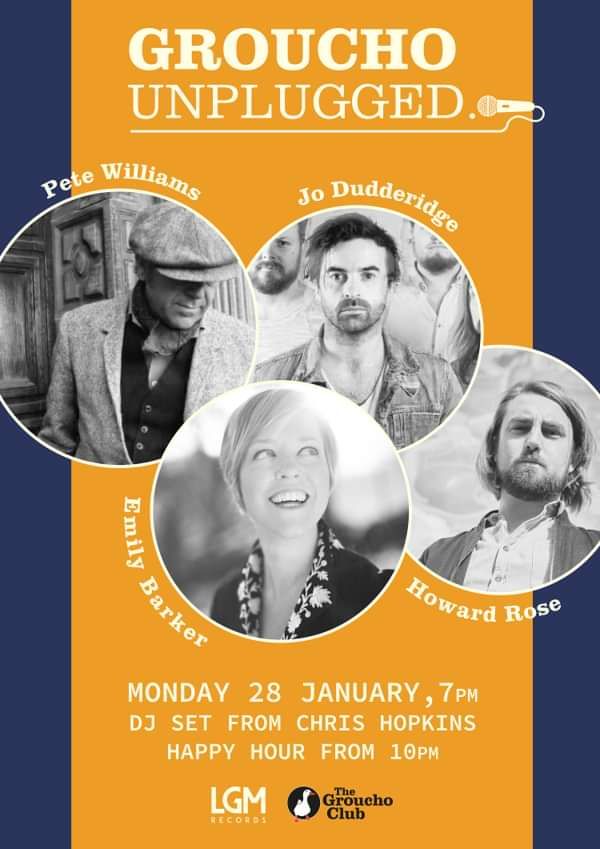 We present intimate songwriter showcases, amalgamating some of best talent that the music industry has to offer with the latest up and coming artists.

A founding member of Dexys Midnight Runners, The Bureau and These Tender Virtues, Pete Williams joins us for a special appearance at Groucho Unplugged. 2018 sees Pete Williams release the third Album in his Sheffield trilogy, ‘H.O.L.L.A.N.D.’ and it’s his best work to date. Recorded live at Tesla Recording Studio through the Autumn months of 2017.

As a solo artist, Pete has toured extensively and internationally from the first 2Tone tour, through to major European and Australian festivals and was personally invited as special guests across 32 sold out shows with The Proclaimers on their recent UK tour.

An award-winning Australian singer-songwriter, Emily Barker is probably best known as the writer and performer of the award-winning theme to the hit PBS Masterpiece drama Wallander starring Kenneth Branagh, as well as, writing the theme song for the major BBC2 drama serial, The Shadow Line, starring Chiwetel Ejiofor and Christopher Eccleston.

She won UK Artist of the Year at the UK Americana Awards and performed on stage alongside Robert Plant and the Sensational Space Shifters, Imelda May and Mumford & Sons.

“finally sets out her true claim for stardom” Q ★★★★

Jo Dudderidge is the lead singer and main songwriter for Manchester’s much-lauded act The Travelling Band. The Travelling Band have released 4 critically acclaimed albums – Under the Pavement (2008), Screaming is Something (2011), The Big Defreeze (2014) and SAILS (2017). They have toured extensively around the world including performances in Canada, Georgia and were the first British act to visit and perform in Kosovo.

They have performed at festivals such as Glastonbury (3 times at the Other Stage/Park/Acoustic), CMJ Festival (New York), NXNE (Toronto), Cropredy, Green Man, Festival No.6, Kendal Calling, End of the Road and Beautiful Days and spent much of 2016 touring Europe as Lissie’s backing band and support act.

Howard first rose to fame after being mentored by Sir Tom Jones through into the Finals of The Voice in 2015, his impressive abilities as a singer and songwriter making him cut through the pack as an authentic talent. With an array of new material inspired by the likes of Sharon Jones, Charles Bradley, and the new soul sound currently dominating the US. Favourably compared to Alabama Shakes, Father John Misty and Wilco, Rose offers a unique and refreshing take on both modern soul and rock ’n' roll, pulled together by an unmistakable vocal and magnetic stage presence.