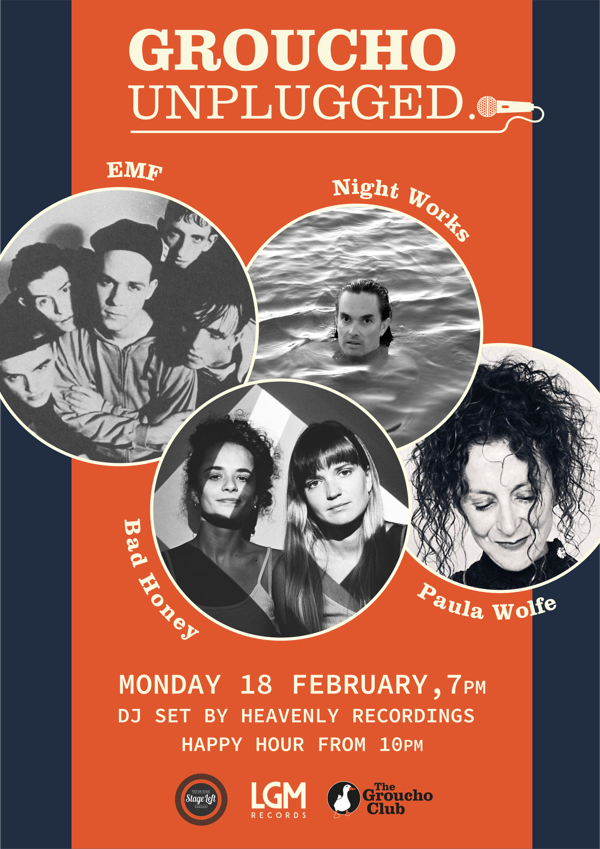 Groucho Unplugged offers intimate songwriter showcases, amalgamating some of the best talent that the music industry has to offer with the latest up and coming artists.

Rising to fame in the early Nineties, EMF scored a string of 10 Top Thirty hits but are probably best known for their single "Unbelievable", which dominated charts around the world in the summer of 1991.

After 3 successful albums and worldwide touring, the band moved on to even more success with other projects. Singer James Atkin went on to receive an Ivor Novello nomination for his songwriting whilst also working with acts such as Bentley Rhythm Ace and releasing his own solo album. Guitarist Ian Dench went on to write hit songs for artists such as Beyonce, Shakira, Florence and the Machine and The Prodigy, as well as, working as the Vice President of A&R for Epic Records, New York.

James and Ian will join us for a very special stripped back performance at Groucho Unplugged this February.

Margate-based Gabriel Stebbing (Night Works) returns with his first solo material since 2013’s critically acclaimed debut album Urban Heat Island. In the interim, he spent three years working with Christine and the Queens in the studio, live and writing on her debut album Chaleur Humaine, and remains a studio collaborator with Mercury-nominated cult heroes Metronomy. 2019 will see a flood of new music from Night Works, beginning with songs from the Stuck on Broadway EP, due from March, and leading on to his second album, produced by James Greenwood AKA Ghost Culture (of Erol Alkan’s Phantasy stable), the studio wizard behind Daniel Avery, Death in Vegas and Kelly Lee Owens.

Bad Honey (Lydia Clowes & Teresa Origone) are a South London based duo. Influenced by a wide range of artists, from Lianne La Havas to James Blake, their sound is a delicate and dreamy combination of pure sounding vocals, catchy synths and bouncing beats, resulting in a blend of soul, pop and lo-fi electronics.

Just into the campaign and Paula Wolfe’s new album, White Dots (★★★★MOJO) is already being hailed as ‘exquisite’ with her production on this latest ‘collection of songs that combine glorious Brill Building-style chant, jazz drums and lustrous strings’ positioning her as ‘a latter-day Carole King’ (Lucy O’Brien). Performed with ‘a high clear voice, observational humour and a quiet sense of drama’ (LOB), Wolfe presents a new array of characters that include a cross-dressing train driver who abandons the drudgery of his shift for the glamour of a night club, an ageing bachelor looking for late love online and Mexico City’s street children working its nocturnal streets while their compatriots busk on the Paris Metro on the other side of the world.